When we last saw our intrepid former jewel thief he had deftly eluded the police by enlisting the help of his housekeeper, Germaine.  While Germaine led the unsuspecting cops on a wild goose chase through some of the most picturesque villages in the south of France, Robie walked calmly to the street in front of his house to catch the bus to Monaco.

It’s during the scene on the bus that Hitchcock makes his cameo appearance in the film (seated next to Grant). 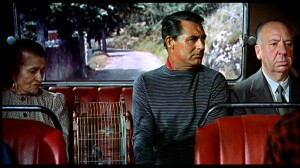 In Monaco Robie visits Bertani, a former comrade from his days in the French Resistance who is now a restaurateur.  The location of Bertani’s restaurant is at the western edge of Port Hercules in Monaco.  I’m told there actually was a restaurant there years ago, but if so, it has long since closed.  As Robie leaves the bus and walks down the steps to the restaurant (making sure to hide his face from a policeman) we’re given a clear view across the port to Avenue d”Ostende as it leads up to the casino. 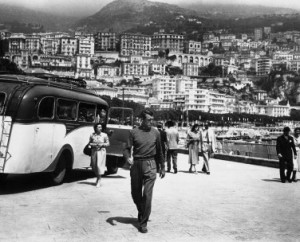 During his meeting with Bertani it becomes apparent to Robie that the only way to clear his name is to catch the thief himself.  So with the police hot on his heels he flees Monaco in a boat with the precocious Danielle Foussard (Brigitte Auber).

They are headed for Cannes.

The scenes that take place on the boat were obviously filmed in the studio, but the background shots are still geographically correct.  As they leave Port Hercules and head west, the Musee Océanographique is plainly visible in the background.  It’s located high on a cliff in Monaco-Ville (the Royal Palace is also located in this older section of the principality).

Next stop, the beach at Cannes….

MonacoThe principality of Monaco is spotlessly clean, very chic, quite possibly the safest locale in the world, and full of money.  It is also the place that every first time visitor to the area wants to see.  If you don’t mind a certain antiseptic, Disneyland quality, it can be lots of fun to spend a few days here.

For those on a budget I recommend booking a hotel next door in Beausoleil.  You’ll pay less and it’s just a quick hop over into Monaco.

Casino de Monte Carlo
Easily the most recognizable attraction in Monaco, the casino is ground zero for all first time visitors.  You’ll need your passport (and a cover charge) to enter, but I do recommend checking it out at least once (though it’s usually a pretty low-key experience).  High-rollers in need of a little more excitement should check out the less formal American style casino next door.