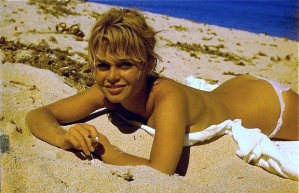 Brigitte Bardot on the beach in St Tropez

I‘ve only been to St Tropez once and let me tell you my expectations were not high.

It was Christmas Eve day several years ago and my wife and I, with our good friend Yamina, decided to hop in the car and take a leisurely ride.

A little under two hours later we were pulling into St Trop.

I had mixed emotions.

Images of Kid Rock and Pamela Anderson cavorting on a yacht with their drunken entourage were a bit hard to shake, and I didn’t really have any interest in meeting P. Diddy (I’m sure the feeling was mutual), but I had always wanted to visit this famous town.

Years ago I watched Roger Vadim’s “And God Created Woman” and was intrigued by the quaint, war torn little village that had become so popular (and also, of course, by the beautiful Brigitte Bardot).

So buck up man, I thought to myself.
Give St Tropez town the benefit of the doubt.  There must be something appealing about this star-studded celebrity Mecca.
Ditch that negative attitude and enjoy the day!

Our first stop was a nice little cafe on the quay with a table in the sun and coffee for three.

There was a nice rhythm to the place.
Handsome couples strolling slowly down the street, plenty of well-behaved dogs, no sign of P. Diddy.

Just behind the Quai Jean Jaures is the bustling Place aux Herbes.
We arrived as the market vendors were finishing up their morning work.
Discarded vegetables and flowers lay on the sandy ground as tiny work trucks maneuvered into position to load up the remaining goods.  Christmas lights shaped like stars hung loosely across pedestrian only lanes.

St Tropez is a shoppers paradise, and for that reason alone I should have hated it, but it was fun meandering down the charming streets filled with every designer boutique imaginable.

Who knows what any of that means?

While my wife salivated inside a small boutique I watched as an enormous, shaggy dog tried with little success to guide his owners down the street.  Every few feet he was forced to stop so that children and adults alike could bestow on him the endless love and attention he so obviously deserved.

At lunch time we dropped into a small grocery store for bread and cheese and had a pleasant little standing picnic on the sidewalk.  Very French.

Winding through the Ponche Quarter I happened upon the Porte du Peche and immediately recognized it from “And God Created Woman”.  Looking at the deserted, rocky spit of beach I was happy to note that it still retained tremendous charm.

I’ve heard that St Tropez is a lot of fun in August when the crowds descend and the bars stay open until dawn and the beaches are full.

I don’t know about that but I can tell you one thing.