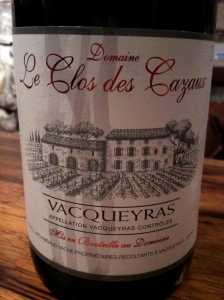 How many times have you avoided ordering a particular wine at a restaurant because you didn’t know how to correctly pronounce it?  If you’re like me, more times than you care to remember.

With that in mind I’d like to pass along a little pronunciation tidbit I picked up recently in Provence.

I had always assumed that the “s” at the end of Vacqueyras was silent because there’s no vowel after it, and of course, any hayseed with a double PHD in French would know that, right?

The “s” in Vacqueyras is not silent.  It’s not a hard “s”, but one should pronounce it nonetheless.

The reason for this, I was told by a French wine maker, is that Vacqueyras is actually a Greek word derived from….blah, blah, blah….who cares really?

Isn’t the point just to not make a fool of yourself in front of the waiter?

So now you know.

When ordering one of these exceptional wines in the future you may freely and with head held high pronounce the “s”!