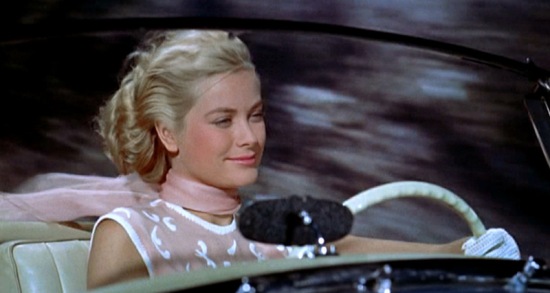 After the wonderful raft scene just off the beach in front of The Hotel Carlton, Francie Stevens (Kelly’s character) convinces John Robie to let her accompany him on a “villa shopping” excursion.

What follows is one of the great driving sequences in cinematic history.

Hitchcock certainly must have known that the French Riviera would electrify the screen almost as much as Grant and Kelly, and to his credit, he let it.

A tour of “To Catch A Thief” locations is, quite simply, a tour of some of the most beautiful scenery the French Riviera has to offer.

Stevens and Robie depart for the hills from the hotel parking lot in her sublime Sunbeam Alpine convertible.  For anyone who has been to Cannes it’s interesting to note how things have changed in front of The Carlton.  In 1954 one simply had to pull off The Croisette (back then a pleasant two lane road) and park in front of the hotel.  Today the former parking area has been turned into a garden and The Croisette expanded into a four lane boulevard separated by a tree-lined median.

In the next clip the Sunbeam Alpine is seen traveling along a winding road (most likely the moyenne corniche) with the Mediterranean in the background.  The promontory of land jutting out into the azure water is St Jean cap Ferrat.

The moyenne corniche is still one of the world’s great drives and I heartily recommend it to anyone visiting the area.

The ensuing scene, featuring plenty of clever dialogue by both Grant and Kelly, was played out at Hollywood’s Paramount studios using rear-screen projection, but it’s interesting to note that the backdrop landscape is geographically pretty accurate.  That’s still St Jean cap Ferrat in the background even though they’re now “driving” at a higher elevation on the grande corniche.

As I was writing this post I referred back to the film a few times and noticed something I hadn’t seen before.  The tiny village of Eze, perched precariously on a steep cliff overlooking the Mediterranean, is clearly visible.  In the early fifties Eze was not the thriving tourist destination it has become today (the village apparently didn’t have running water until 1952). 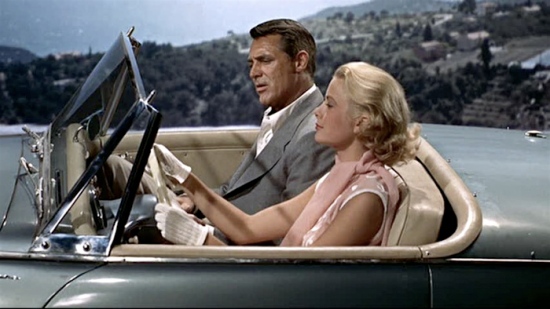 When the couple arrives at the front gate of the “Sanford Villa” the film’s geographical accuracy becomes a bit skewed.

The stone gate is located about an hour west of Eze in Grasse St Francois, but it is not the actual entrance to the house that was used as the “Sanford Villa”.

The home and grounds used for the “Sanford Villa” are in Cannes at 145 Boulevard Leader.

Today it remains a private residence and access is not possible.
The German Film Crew I worked with recently tried unsuccessfully to contact the owner in an attempt to film there.

On the grounds of the “Sanford Villa” in Cannes.

Many TCAT fans erroneously believe that the home used as the “Sanford Villa” was the Villa Ephrussi de Rothschild in St Jean cap Ferrat.

Next stop, Eze, La Turbie, and the Grande Corniche….