At the end of post # 4 the police were fast approaching Robie’s villa just outside the village of St Jeannet. 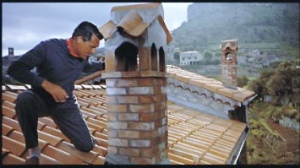 The police enter the house and ask the former jewel thief to accompany them to the station for questioning.  He agrees, but asks if they will first allow him to change into something a bit more formal.  While changing in his bedroom he fools the police into thinking he has escaped by car.  And so begins the famous chase scene that  takes viewers through some of the most picturesque villages in the south of France (apparently this was was also one of the first cinematic sequences filmed from a helicopter).

The Chase:
The first town we see is Le Bar sur Loup.  Le Bar is a picturesque, working class village that looks pretty much the same today as it does in the movie, with its dramatic, fourteenth century chateau dominating the town center.  Notice the old railroad bridge at the edge of town. END_OF_DOCUMENT_TOKEN_TO_BE_REPLACED

I recently posted a few lines about one of my favorite places in the south of France, the Auberge de Tourrettes. One of the many things that makes the Auberge so special is that it’s located at the edge of one of the most picturesque villages in the area, Tourrettes sur Loup.
Listed below are a few helpful facts. 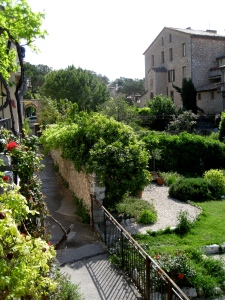 THE VILLAGE:
Tourrettes sur Loup is located five kilometers west of the town of Vence, and approximately forty minutes from the Nice airport.  Literally hanging off the side of a cliff, this beautiful village is well known for producing more violets than anywhere else in France.  A good place to start your tour is END_OF_DOCUMENT_TOKEN_TO_BE_REPLACED