In August of 2010 I received an email from Jean Buchanan, a writer from England who had been commissioned to dramatize the novel “To Catch A Thief” for BBC Radio and to make an accompanying BBC Radio Arts feature about the writing of the book. American author David Dodge penned the thriller in 1950 while living in a rented villa (Villa Noel Fleuri) in the south of France with his wife and young daughter, Kendal. The idea for the story came to him after the luxurious villa next door was robbed by a daring “cat burglar” during a cocktail party. As guests dined on the terrace overlooking the Mediterranean, the thief climbed in at the back of the house and snatched items from the guest bedrooms. Dodge would later remark that after hearing about the brazen robbery, “To Catch A Thief practically wrote itself!”

Jean had stumbled upon my blog during her research for the BBC projects and asked if I could help locate Villa Noel Fleuri. I agreed to assist in any way possible and the search began, aided in no small part by another of Jean’s recruits, Randal S. Brandt in Berkeley, California. Randal is the creator of A David Dodge Companion, an outstanding website devoted to the works of David Dodge .

Several months prior to hearing from Jean I had actually been in touch with Dodge’s daughter (at that time she was still alive and living in Mexico) in an attempt to find the villa used as John Robie’s house in Alfred Hitchcock’s film adaptation of the book. I asked her about the villa she lived in with her father and her only memory was of a long, winding driveway with lots of trees leading up to the house. She thought it had been somewhere near Juan les Pins.

I relayed this tidbit of information to Jean, who was quickly proving to be a dogged researcher, poring over Dodge’s books and the travel articles he wrote for “Holiday” magazine.

In an email to me she wrote:

One of the best clues I have for the Villa Noel Fleuri (if that’s its real name) is the name of the next-door villa which was burgled.  Dodge names it as the Villa Eden Roc in Golfe Juan.  He says that it was owned by millionaire industrialist Norman K. Winston and was renowned for the celebrities who visited regularly (film stars, British aristocrats, etc.).  The only reason the Dodges were able to afford the rent of the villa next door is that the owner was willing to let them have it at a favorable rent if they agreed to sort out the overgrown garden.

In one of his travel books, Dodge describes his first sight of the villa:-

“I can close my eyes now and recover that first glimpse.  The house stood on a hill in Golfe Juan between Juan-les-Pins and Cannes.  We reached it by a side road which left the main highway skirting the gulf and wandered up the hillside between mossy old stone walls covered with climbing rose vines and sodded in the cracks with Flanders poppies.  At the top of the hill a little gate with a tinkling bell attached to it opened into a huge jungle of garden full of greenery:  cork-oaks, bamboo, palms, birds-of-paradise plants, camelia shrubs, open grassy places and more Flanders poppies.  A brook starting at the top of the garden purled along the side of a twisting path which led down to the house.  Just at the front door, where the camelias bloomed, there was a little level spot under a pine tree where the brook widened to form a pond full of water-lilies before it spattered over a small cliff.  The house was built on the edge of the cliff, down which the path continued to the foot of the garden fifty yards below.  The terrasse, shaded by climbing vines of wisteria, overlooked the whole sweep of the Mediterranean from Cap d’Antibes to the Iles de Lerins, and the front windows of the salon faced, across about a mile of water, the front window of the cell in the fortress on the Ile Sainte Marguerite where The Man in the Iron Mask whiled away his time two hundred and fifty years ago.”

Jean suggested looking into the archives at the newspaper Nice-Matin hoping that perhaps a record of the burglaries committed in 1950 would provide a clue to the villas location.

…with Nice-Matin, I think we should look at its archives from the 1950s (and talk to an archivist / editor) to see the reports of the cat-burglaries which inspired David Dodge [and he was wrongly suspected of committing them].  I have found references to the burglaries in their online index under the burglar’s name Dariio Sambucco (and also his dashing pseudonym Dante Spada), These reports could provide valuable clues to the location of the Villa Noel Fleuri by naming the megaposh villa next door (i.e., the villa which Dodge, in one of  his 1960s travel articles, refers to as the Villa Eden Roc, but I am suspicious of this house name…).

I put a call in to the paper as Jean began delving into any archives available online.

Marya, the producer of the BBC radio piece, contacted me in late August and asked if I could coordinate my travel plans so that the three of us (Marya, Jean, and I) could meet in Nice and search for the villa together. She also wanted to interview me for the feature.

I happily rescheduled my flight.

When Marya sent me the schedule (below) she and Jean would follow once they landed in France I knew I had it easy. They were a veritable dynamic duo of diligent research.

I’m now confirmed, arriving 0900 on Thursday at Nice airport. Jean is arriving by train the night before. We’ll be staying at the Hotel du Golfe in Golfe Juan.

Immediately I arrive, I’m making my way to the Carlton to meet Jean and interview M Stephane Fanciulli, the chief concierge. Then, over the next two days, in no particular order but taking into account opening hours, we aim:

-and, of course, look for the Villa Noel Fleuri and the Villa Eden Roc on little roads near Golfe-Juan.

My return flight from Nice is at 1735 on Friday.

At 4:30 on a sunny Thursday afternoon I sat waiting in the little parking lot of the train station in Golfe Juan.

Jean and Marya arrived and we got quickly down to business. With the map spread out on the hood of the car we pored over it searching frantically for a little road that seemed to fit the bill. We set off driving west out of Golfe-Juan on the route de Cannes, and took the first steep little road into the hills.

It was called Rue Edith Joseph.

I drove slowly with the tape rolling and a big furry microphone positioned between Jean and me. Marya asked us to describe in detail the narrow lane. Gated villas dotted the hillside to our right and to our left the deep blue Mediterranean sparkled in the afternoon sun. The rue was, indeed, long and winding,with lots of trees on both sides. An old stone wall ran parallel to the road.

“The house stood on a hill in Golfe Juan between Juan-les-Pins and Cannes. We reached it by a side road which left the main highway skirting the gulf and wandered up the hillside between mossy old stone walls covered with climbing rose vines and sodded in the cracks with Flanders poppies.”

Could this be the long, winding driveway with lots of trees leading up to the house that Kendal had described?

I stopped in front of a large building on our left.

It was a pale rose pink villa that had been turned into an apartment complex. On the back side a large, balustraded terrace jutted out from the top floor. The view it provided down the slope and out into the Mediterranean must have been stunning. At the closed front gate there was a small security keyboard panel built into the stone entrance, and over the impressive doorway of the building was the name Villa Eden Roc.

We were silent for a moment and then broke out in laughter….could we really have found it so quickly?

I put the car in neutral and backed slowly down the hill. Had we missed the Dodge villa altogether or was it no longer there?

I stopped in front of an old gate, locked tight with a heavy chain and padlock. Behind it a steep row of uneven stone steps led down into a maze of terraced, thick underbrush. Looking out over the fence the balustraded flat roof of a small square building was visible, shining rusty-red in the waning afternoon sun.

It was easy to see how we had missed it. 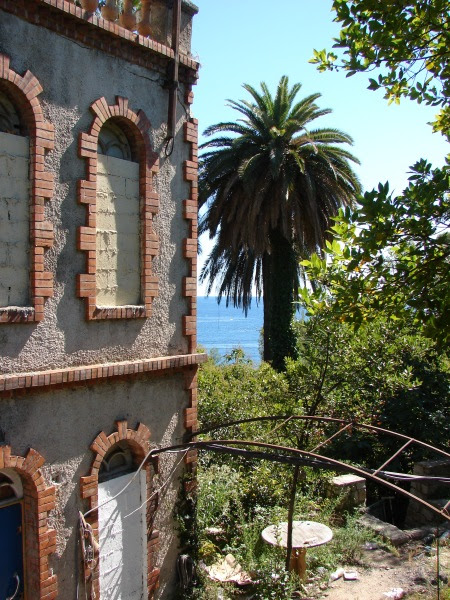 We walked to the gate and peered down the steps. The house was small, certainly by French Riviera standards, but even in its dilapidated state one could see it must have been tremendously charming in its prime. The grounds clearly had not been tended to in years but in the early 1950’s it must have been a gardeners paradise.

I jumped the gate and walked down the steps.

The temperature dropped perceptibly as I stepped down into the undergrowth. A tiny stream trickled nearby. As the stench of rotten food and body odor wafted up to me I realized it was probably not a good idea to step inside the doorway. Clearly the house had been taken over by squatters and I had no interest in invading their territory. Besides, we had accomplished what we set out to do, find the villa in which To Catch A Thief was written.

We snapped some pictures and drove into Golfe Juan for pizza and red wine and to discuss out little adventure as we watched the sun slide down into the sea. Jean and Mayra were scheduled to fly out the next morning. By the time we said our goodbyes we had spent a total of about three hours together, but for me it had been a grand adventure and I wouldn’t trade it for anything.

I strongly recommend picking up Jean’s book, “Mr Dodge, Mr Hitchcock, and the French Riviera”, for the complete story on To Catch A Thief.