Brigitte Auber told me recently that she first met Cary Grant in Cannes, just before filming began on “To Catch A Thief”.

Alfred Hitchcock introduced them on the balcony of Grant’s suite at The Carlton, overlooking the Bay of Cannes.

She liked him immediately.

The setting for such an auspicious introduction seems fitting doesn’t it?

Where else but The Carlton would a young, beautiful French actress, destined for a long, successful career, meet the most famous movie star on the planet?

Today, more than fifty years later, The Carlton continues to cling tenaciously to its glamorous past.  It somehow still manages to be the place to see and be seen during the annual International Cannes Film Festival, and for those willing to shell out an obscene amount of money, the Alfred Hitchcock Suite awaits your arrival.

Hitchcock wisely chose the elegant hotel, ideally located on the famous Boulevard de la Croisette, as his home away from home during filming.  Numerous scenes were shot in the hotel’s interior, exterior, and  on the private beach across La Croisette.  There’s even a short clip in which the Carlton’s stationary is featured.

Brigitte told me that her wonderful scene on the hotel raft with Grant and Grace Kelly (in which Brigitte and Kelly verbally spar) was actually shot on a studio set in Hollywood.  Thinking of it, she said, always reminds her of her first trip to California. 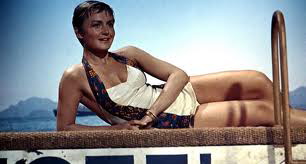 Many of the actors were required to fly to Los Angeles once their location shots in the south of France were finished.  When it was Brigitte’s turn she became nervous.  She would be traveling alone for the first time to the United States and her English was very limited.  She was terrified that no one would be at the airport to meet her and help her find her hotel.

So it was with no small amount of trepidation that she disembarked in sunny California after a very long flight from France.

As she entered the arrivals terminal there was, to her great relief, someone waiting for her.

No assistant, no driver, and no agent, just one guy with a big smile on his face.

The most famous movie star on the planet, Cary Grant, had come alone to pick up his friend.

If you’re ever in Cannes I suggest stopping for a drink at the low-key Petit Bar just off the main lobby.  It’s a great way to experience the hotel without shelling out a small fortune for a room.