Recently I took advantage of a beautiful fall day and drove to the col de braus in the eastern backcountry, a spot that has been on my to-drive list for some time.

My route began on the D2204 just outside La Trinite, the industrial suburb north of Nice.

Admittedly, there is not much to see in La Trinite, but patience has its rewards.

As I cruised into the hills, past the clutter of Cantaron, grunge gave way to green countryside.

Here the road meanders comfortably back and forth, the occasional straightaway appearing at just the right time beneath perfectly aligned rows of plane trees.

In twenty minutes I felt properly tucked away in the backcountry as I dropped down into L’Escarene, a pretty town built in the eleventh century at the confluence of the Redebraus and Paillon streams. The ancient bridge over the Paillon took me northeast toward Touet-de-L’Escarene, roughly 3 kilometers away.

The road narrowed into a single lane as it cut through the center of Touet-de-L’Escarene, and as I crept along, I could almost touch the crumbling facades of the old houses that line the street.

Up to this point the climb had been mostly gradual, an easy lark on a weekend morning, but now, outside Touet-de-L’Escarene, the mountains rose up steep, jagged and breathtakingly beautiful. 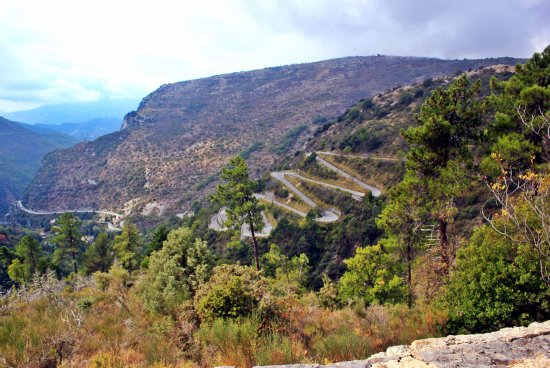 Soon I entered a series of switchbacks cut into the mountainside above a deep ravine. The sheer drop-off at the edge of the pavement was, at times, vertigo-inducing. The final set of “lacets”, eight hell-raising twists up a steep slope, made a fitting finale for a great drive.

From here, there is the option of taking a hard left onto the D54 (before you reach the col) and driving up to the spectacular col de turini, a regular stage in the Monte Carlo Rally, or staying on the D2204 as it crests the col de braus and descends down into the town of Sospel.

From Sospel head north on the D2566 and reach the col de turini from the opposite direction or drive south to Menton.

Whichever route you choose you will have fun.